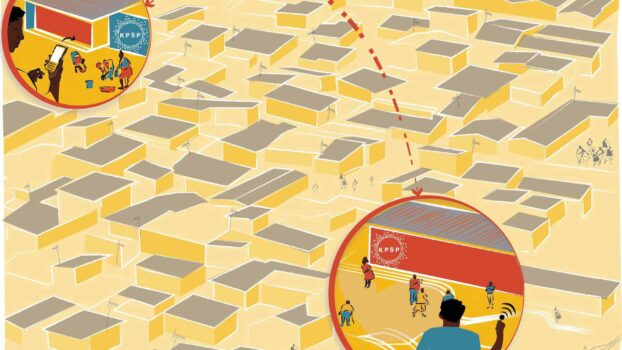 It is debatable whether today architects have the power to affect significant urban change. The range of their disciplinary incumbency is limited to relatively small and isolated design interventions; large expansive visions of urban transformation are, as a rule, out of the question. Nothing is more radical than a realizable transcendental transformation but, if continuing to operate under the same premises, the chances that architects could realistically and productively envision radically different environments that could “promote a broader and more holistic approach to inclusion” seem, unfortunately, not very high. A new scope, a new vision and new tools are necessary to be able to productively tackle such ambitious goals.

Reset: Towards a New Commons might become a unique opportunity to attempt radical inclusion by considering a design model that, instead of continuing to rely on the primacy of the designing subject—the developer, the unelected bureaucrat, the architect, the landscape architect, the urbanist—could attempt to redesign the design process itself, making it more inclusionary and accessible. With the help of evolving AI technology, this exhibition could explore the potential of another, more democratic, design process that could start to replace one that, up until now, has mostly relied on a particular few to decide what the future of the city should be for everyone else.

It seems to us that, trying to address endemic urban social problems such as loneliness, exclusion and discrimination with traditional architectural design methods, will not be likely to succeed in more than a marginal way. If the attempt turns out to be ineffective, it might in the end appear as mere window dressing, or worse, an effort to placate popular discontent and forestall the potential for political mobilization, heading off the possibility of more meaningful change.

To bridge the gap between the ambition of the ends and the modesty of the means, we are proposing a virtual approach to such a design problem, one that might help expose existing policy constraints to achieving equity and also use technology to allow users to explore alternative policy frameworks. This approach would not be burdened by the specifics of designing for a particular place or concrete construction, but would be intended instead to be universally applicable and readily adaptable to local circumstance and particular availability of means.

To that end, it is perhaps possible to take advantage of the opportunities presented by ongoing developments in technology and AI. Given the typical complexity of any municipality as a functioning administrative body, enlisting the tools of big data processing offered by artificial intelligence should be part of any serious effort to imagine another future in the city. We would like to propose an exhibition as a piece of software that explores the potential of this opportunity.

There are emerging, artificial intelligence-enabled software platforms meant to maximize the efficiency of real estate development projects. One example of such software is Sidewalk Labs’ DELVE, a tool with the capacity to run through a large number of code-compliant massing alternatives when designing buildings under the legal constraints of zoning envelopes to maximize their profitable outcome.

An analogous, but substantially different application, could be developed to respond in a similar manner to an expanded—more explicitly socially concerned—set of design parameters. This set of alternative parameters would try to reach beyond acknowledging the requirements of current code and prevalent economical considerations to pose alternative eco- socio- political scenarios allowing different outcomes, including ones responding to the emotional and psychological needs for companionship and fellowship in community.

As currently envisioned, the exhibition could present a series of familiar urban situations in the form of interactive 3D models of the city. The models would explicitly communicate the related issues of social isolation and/or compromised accessibility and invite the visitors to propose possible solutions to achieve a well- integrated social community by using an interactive interface. The invited interaction between person and machine would result in a real-time, cause and (likely) effect transformation of the 3D model.

For the purposes of the exhibition the mechanism could work with relative simplicity, but we see its potential as a device that could gainfully be developed as a tool to democratize the process of design while, at the same time having the advantage of immediately anticipating the possible results of the proposed design transformations. Visualizing a conceptually endless chain of thesis, antithesis and synthesis, the software could perhaps become also a tool to reveal the perils of unintended consequences and the possible consideration of likely unanticipated events. If possible, one would wish the urban planners of the mid- twentieth century could have had access to a resource like this.

Applications such as DELVE may currently lack mechanisms of self-criticism or capacity to account for necessary improvement from without; they might therefore risk encouraging forms of work that may privilege the perpetuation of what is already allowed while implicitly denying the possibility of the new. Nonetheless, they remain extremely interesting and, if properly considered, they could even at some point embody their own antithesis. Future iterations could usher in the development of more democratic processes of urban design through AI-enabled participatory action: a future city envisioned not from the top down, but from the bottom up. We believe the challenge posed by this idea also animates the values implied in the call for proposals for Reset: Towards a New Commons. Whatever form it eventually takes, to be successful, the exhibit should be able to transpose a social reality fraught with high emotional charge and pent-up frustration into dry quantifiable information that can become a premise of design, a provision in the zoning code or an algorithm in the coding of this software platform.

What design strategy or regulatory provisions might possibly alleviate loneliness, prevent discrimination or reunite people? Create more open, publicly accessible, green space? Mandate wild spaces for other species to use and move through? Doing away with functionalist zoning to create an integrated mixed- use city? More integrated social housing? Free public transportation? The integration of kindergartens with retirement homes? More community centers, communal kitchens and social condensers? Schools, hospitals and libraries systematically distributed throughout the city every so many blocks like in Cerda’s Barcelona Ensanche vision? More urban farming?

These and many other formulations could be considered as desirable assets to the city and mocked up as options for urban transformation by the software/exhibit, without absolute certainty and unequivocal confidence, tentatively and haltingly: a window into a possible future of the city could be opened by the collective hand of the participants.