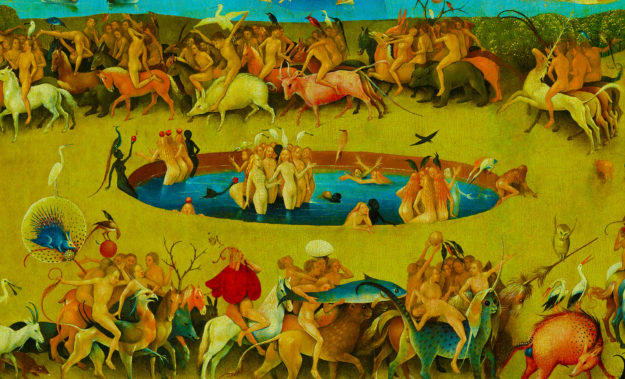 Amplifier Inc. is a nonprofit 501(c)(3) corporation founded in 2013.  Its mission is to employ emerging ideas, media, design, and aesthetic strategies to alter the terms of political debate, influence public policy, reconceive theoretical frameworks, promote proven tools and methods to improve local and global governance, and advance systemic reform and formation of new institutions. It produces events, public forums, white papers, media, reporting, and architecture and design projects, and participates in political and community advocacy to accomplish these goals.

James Andrews is an artist, educator, organizer, curator, and strategist based in New York City. His work involves decentralized intelligence and new forms of collective organization. Andrews has exhibited, taught, performed, presented and organized extensively at museums, galleries, schools, and alternative spaces across the US and Europe.

Tunde Onikoyi teaches African Cinema/Screen Media and Postcolonial Studies in Department of Languages and Literary Studies, Adeleke University, Ede, Osun State Nigeria, and had earlier taught in Kwara State University and Elizade University. He was appointed Member of Jury, for the African International Film Festival in 2018. He is a prodigious scholar, with several publications in book chapters and journals including, Journal of Pan African Studies, Black Camera, African Theatre, African Studies Review, Journal of African Cinemas and Journal Media Communication Research. He is currently working on book project on African Literatures for Movies.

William Rockwell is a practicing architect, living, and working in the Lower East Side. He has worked in New York for 30 years on a variety of preservation, renovation and public event projects with the Art Production Fund, the Museum of the Moving Image, the New Museum, PS122 and the Architectural League as well as private residential and commercial clients. He is a founding member of the Grand Street Democrats that has deepened the engagement and conversation with the neighborhood community, its elected officials and city agencies—especially in relation to the East Side Coastal Resiliency Project poised to dramatically alter and improve storm protection from lower Manhattan to Midtown. He received a Bachelor’s of Architecture from Virginia Tech and a MAAD from the GSAPP Columbia University.

Raphaele Shirley is a multi-media artist born based in New York state, producing works at the intersection of art and technology. Her projects combine sculpture, light art, public art, collaboration, and performance.

Stephen Zacks is an advocacy journalist and organizer based in New York City. A graduate of Michigan State University and New School for Social Research with a bachelor’s degree in interdisciplinary humanities and a master’s in liberal studies, he is a contributor to Dwell, Oculus, Architect’s Newspaper, Abitare, L’Architecture d’Aujourd’hui, Brownstoner, Landscape Architecture Magazine, and Metropolis, where he previously served as an editor. His work has received support from ArtPlace, Creative Capital, Graham Foundation, MacDowell, National Endowment for the Arts, New York State Council on the Arts, and the Warhol Foundation.